This post has been awhile coming. I’ve been Crossfitting for a couple of years now, although not as consistently as I would like. I grew up participating in sports, weightlifting, and most recently I had a few years where I trained for triathlons and completed an Ironman. I like staying active and I’m pretty competitive. The issue I found when I was training for long distances and not weightlifting was that I was losing upper body strength and muscle, which didn’t make me feel fit. After not training for triathlons for awhile, it got worse. I knew I wanted some weights incorporated into some routine but I wanted to follow a program and not do the same old, same old Chest on Mondays, back and bis on Wednesday, etc. That’s where Crossfit came in.

I joined a local Crossfit gym with my wife and we started an on-ramp program. It was great! We both lost weight in the first 4 weeks and we were feeling much healthier and fit. We struggled through 20 burpees in a light WOD (Workout Of the Day) put together for beginners, which is pretty funny because that’s usually incorporated into a warmup routine now. Anyway, what I really like about Crossfit is that it’s pretty much like personal coaching but with a class and an actual program. I don’t worry about what I’m going to do that day, I just show up and a great WOD is put together for me and there are other people that are doing the exact same workout at the same time. It’s motivational.

I also like the focus on functional movements. No bicep curls here, just multi-joint exercises. While there are some complex lifts incorporated with the Olympic lifts, everything is scale-able and good coaches make sure that people are lifting correctly. I like the heavy lifting and focus on strength before most workouts. It gives you a chance to build strength in addition to the stamina and cardiovascular benefits of the WODs. Don’t get me wrong, the WODs build strength as well but we’re usually using lighter weights.

If you haven’t tried Crossfit, I would suggest giving it a shot. Just like any sport or weightlifting routine, take it easy when you’re getting started. It’s not sitting on the couch so you have a chance to get injured. That being said, I don’t see the injury rates being any higher than when I trained with others in triathlons. Also, make sure you have good coaches like the ones at Ctown Crossfit. Good coaches help you scale weights and movements and lift with proper form.

Here are some pictures of me and Crossfit. 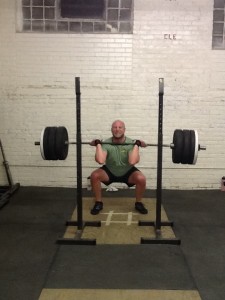 Setting a PR in my front squat. I can still hear my coach yelling “elbows up!” 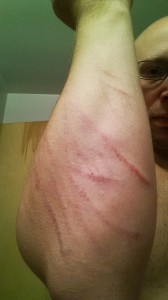 Learning how to do double-unders with a thin jump rope sometimes produces these marks.